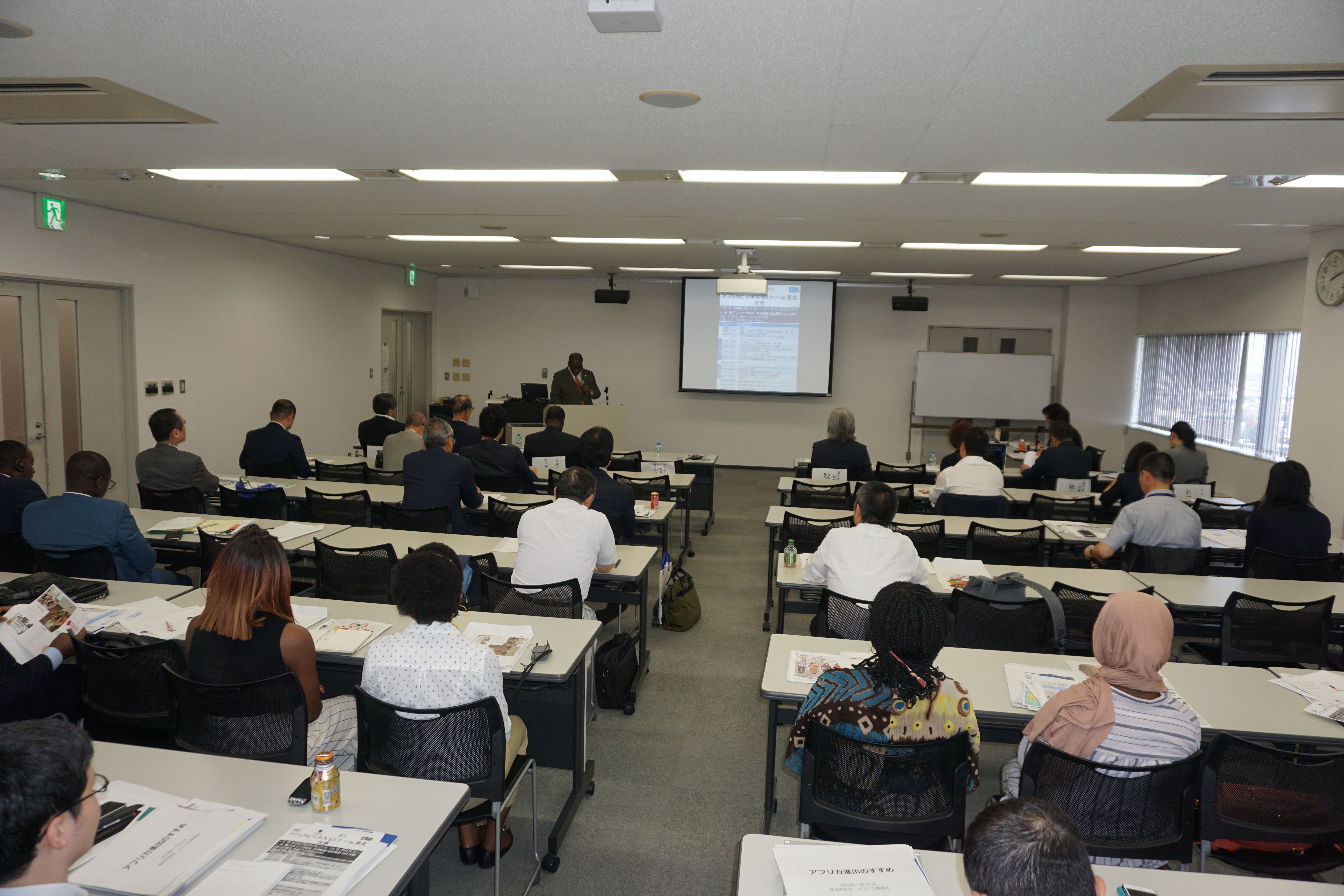 The seminar which was co-organized by the African Association of Miyagi (AFAM) and the Japanese International Cooperation Agency (JICA), and co-sponsored by the Japanese External Trade Organization (JETRO), the United Nations Development Programme (UNDP) and the Japan Association of Corporate Executives had two major aims.
Firstly, it aimed at exposing the Japanese investment community to opportunities in Africa and secondly to connect African students in Japan to Japanese organizations for internship and possible job placement to gain experience in the Japanese business culture.

The seminar was one of the several events organized as pre-event for the 7th Edition of the Tokyo International Conference on African Development (TICAD7) which would take place in Yokohama from 28-30th August, 2019. It was attended by 40 people including 14 company representatives.

By 2.00pm prompt, the seminar commenced with opening remarks by Mr Noguchi Shuji, Senior Regional Coordinatior, Second Africa Division of the Japanese Ministry of Foreign Affairs. He gave a brief history of Africa-Japan cooperation which culminated in the Tokyo International Conference on African Development (TICAD).

The Ambassador of the Republic of Ghana to Japan, Mr Frank Okyere was up next to talk about Africa’s investment potential and encouraged the private sector and the entrepreneurs in Japan to take advantage of the opportunities that have been created by African Governments and Japan for mutual benefits. He stressed that the Economic Community of West African States Trade Liberisation Scheme (ECOWAS TLS) and the African Continental Free Trade Agreement (AfCFTA) allow business to be done in all the 54 African countries

Advocating for partnerships between Japan and African, Mr Ishizuka Tatsuro, Vice-Chairman of the African Committee for Economic Co-ordination, Japanese Association of Corporate Executives did a quick Strengths-Weaknesses-Opportunities-Threats (SWOT) Analysis about doing business in Africa. He concluded that Africa has a virile and growing youth population with a lot of potentials which should be explored for mutual benefits.

Ms Tomomi Ishida, a Private Consultant at the UNDP Japan Representative Office on TICAD spoke on corporate support for small and medium-sized businesses in Africa. She highlighted that there are lots of business opportunities in line with the Sustainable Development Goals (SDGs) of the United Nations in Africa. She talked about cases of social businesses geared towards improving sanitary conditions by providing potable water and managing waste efficiently.

Talking about JICA’s private sector collaboration and relationship with international students, the 1st Director, JICA Tohoku Center, Mr Katsuyoshi Sudo pointed out that the African Business Education (ABE) Initiative for Youths, conducted by JICA, has exposed many African students to the Japanese academic and business environments so that they have taken their acquired skills back to better the African business sphere. He told the Japanese business men in attendance to contact the JICA office should they be interested in having African interns in their companies.

Mr Shunsuke Sato talked about the success story of the Kanedai Namibia Fishing Services headquartered in Kesennuma City, Miyagi Prefecture as a case study of Japanese companies in Africa. His talk was followed by a ten-minute break.

A Professor at the Graduate School of Economics, Tohoku University, Sendai, Akita Jiro took the stage after the break to discuss about the engagement of international students in the Japanese workplace during and after their studies. He intimated the audience with the DATEntre Programme initiated by Tohoku University which was designed to make job search in Japan easy for international students.

Ms Imane Bouamama, an ABE Initiative alumna from Morocco and a member of AFAM, who now works with Armonicos Co. Ltd. in Tokyo gave her perspective as a former student who transited to the Japanese work environment. She explained that she and some other ABE Initiative alumni had started publishing a magazine called ‘African Mags’ to tell stories that bridge the gap between the Japanese society and Africa. Furthermore, she talked about her future plan of spearheading Armonicos Morocco.

The closing remark was given by Dr. Isaac Yaw Asiedu, President of African Association of Miyagi (AFAM), after which there was a networking session for all attendees. The seminar came to a close around 4.45pm.